When Twitter was introduced to my company in 2008, I thought it was destined to be a fad, that this sort of microblogging would fade away, that the world would never get used to cramming ideas into 140 characters. I didn’t think much use could come out of such a limiting tool. I was the beneficiary of many days of humor as I sat outside the salesmen’s offices who gave their unsolicited opinions of Twitter and of what those who tweeted could do with their tweets! But our Marketing Communications expert persisted and before we knew it, we were tweeting and accepting that the world had found a new way to send and receive messages of widely varying degrees of relevance to ever-widening audiences.

The challenge is to take Twitter beyond the mundane reports of burning English muffins and develop it into an effective communication tool for organizations. Twitter forces up to cut to the chase and deliver the hook that keeps people engaged. I’ve seen many creative uses of Twitter but none as powerful as what recently extended from Michele Norris’ “The Race Card Project.”

Ms. Norris, a co-host of NPR’s All Things Considered, wrote a memoir which blossomed from her exploration of the hidden conversation on race which unfolded in America after President Obama’s election. On her book tour, as a means of getting the conversation started, she asked people to write their thoughts on race, in six words or less, on a postcard she provided. What often happened was people took the postcards home with them, thought about it, and sent them back to her. The project began over a year ago. In the past two weeks, her project has taken on a life of its own. She has heard from people all around the world and has posted many of the responses on the Project's website. She continues to receive responses via mail, email and Twitter and continues to invite viewers to submit their six words on her website. In the aftermath of the tragedy of Trayvon Martin’s death in Florida last month, Ms. Norris’ collection offers varying perspectives and poignant reminders of where we are with race, where we have been and where we are going. All captured in six words or less.

It is amazing to me how powerful a few carefully selected words can be. 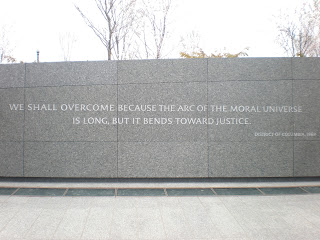 In Washington DC last week, I had a chance to visit the new memorial to Martin Luther King, Jr. If you want to see some powerful words, go there. Phrases from his speeches line the memorial’s arcing walls. MLK had a vision of where we should go, not based on race, but on our inner being.

We often take words for granted. It is easy to forget that we live in a country where freedom of speech is a right rather than a privilege. How important it is to use our words - whether six or more - to spark the conversations that can bring understanding and lead us to treat one another as equals.

See the soul within the skin.
Posted by Kathy Walsh at 5:43 PM