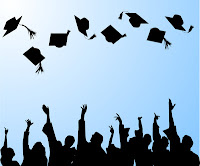 Every graduation season takes me back to my own graduations, when I, consistently, couldn’t wait to get going but was never quite ready to leave. Graduation is always a heady time for anyone on the cusp of enormous change, especially when you are trying to figure out which oar to bring, when you are still not quite sure of the size of the ship.

This year, I received a simple announcement from Laureen, a friend from graduate school, whose daughter, Alexandra graduated from high school on June 2nd. The announcement made me sit right down as if someone had pushed me down - not for any particular mountains Alex climbed to get to where she was, but for the choice she made as her next step in a world which has been so defined by those around her.

When Alex was two, her brother, Garrett, then 4 years old, and her father were in a car accident that left Garrett paralyzed from the chest down. They were running a morning errand in their small New England town when a man coming home from a night shift fell asleep at the wheel and crashed into their car. Over the years, Garrett and Alex and their parents have been unwavering in their focus on a cure for Garrett’s injury. Garrett has found inspiration in others’ similar conditions such as Travis Roy and Christopher Reeve. He, in turn, has been an inspiration to countless others as he has maintained his resilience through multiple surgeries, sought to encourage others with spinal cord injuries and embarked on a fundraising effort of his own design: Garrett and his father, Benton, flew in a single engine plane to the capitals of 48 states, lobbying support for stem cell research, a promising avenue for research into curing spinal cord injury, raising $50,000 on the tour.

Garrett’s story is amazing and he is awe-inspiring in so many ways. His story continues to be filled with hope as he projects a cure for his paralysis as well as the return of his sight which he lost 2 years ago due to complications during a spinal fusion operation.

What I see when I look at the picture of Alex which accompanied her graduation announcement, is the child who accompanied Garrett on so many doctor visits, who missed him and her parents when they had to seek treatment far from home, who helped him be a normal kid in a normal household, who shared his thrills on the Disneyland rides and the frustrations at his limitations. I thought Alex might have lived in Garrett’s shadow. But I was wrong. She has been shoulder to shoulder with Garrett every step of the way. All the while, Alex was tucking the knowledge learned and experiences lived into her budding young mind.

So when I read on her announcement that she will be attending MIT to study Brain and Cognitive Sciences and Biology, I bowed in awe of Alex. Not just because she must be one smart cookie to get acceptance into MIT, but because of her choice of study. I can feel it in the depths of my soul that, as an adult and as a scientist, she will contribute to her brother’s recovery, just as she has contributed to his tenacious will to overcome the obstacles in his path.
Bravo Alexandra! You are an inspiration to me and so many others. You will be unmatched in your understanding, empathy and motivation in your field. A job fantastically well done, in getting where you are. And brain and spinal cord injury patients all over the world just felt their ray of hope brighten.

Click the book cover above for more information about my book & purchase options!