The House That Built Me

A few months ago, my traveling sister and her daughter were on the road and stopped at our childhood home in Ohio where our parents lived from 1966 to 2007. The current owners let my sister and niece in and chatted with them. Maureen captured the conversation. 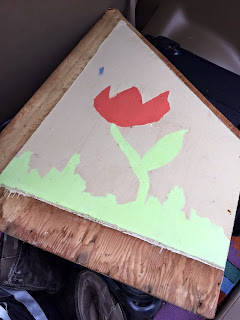 "We are re-doing the basement," said the owner. "Come downstairs, I have to show you something." They had pulled off the paneling to reveal painted flowers on the plywood. He pried the piece of flowered plywood off the side of the basement stairs, "you should have this, a piece of Arundel." A text of the picture of the flowers arrived in my phone as Maureen tried to find the artist. Without skipping a beat, I texted back to claim it. The artwork was mine from that flowery time in the 1970s.

My sister and niece thanked the owners as they left, and he said, "so many people tell me, 'you live in the McCarthy house!', and proceed to tell me what a great guy - and a character - Jack McCarthy was."

It makes me pause and reflect on what makes a house become a “McCarthy House” -  what does it take for any house to earn the name of its former resident and maintain that name years later? And even though I have wonderful memories of life inside that house, it is how the owners lived their life outside of that house that brought it fame. Clearly, my dad was one of a kind. He worked, he coached, he taught, he organized adventures, he danced, he sang, he joked, he made friends easily, he read, he made killer whiskey sours, he shared his intellect without ego, he ran outstanding all-night-parties for his high school seniors, he told stories (then told them again), he beat everyone at Trivial Pursuit (and every other game I can think of) while making it outrageously entertaining for everyone, he adapted to change, he showed up, and he loved all of us, especially my mom.

They were a quietly astounding pair – met in their high school years, went to college far apart, married a year or two after separate grad schools, raised four girls, intertwined with their communities on countless levels, gave their time and talents to people and organizations that needed them, inspired us to do well and do good and always had time to listen like you were the only one in the room. And as I watched my mom gracefully slip off her wedding band and place it on the urn that holds his ashes, before it was placed in its niche, I remembered for the umpteenth time that most people never have what they had. And that I am the person I am because I lived it with them.

So of course the house didn’t build me. They did. But the house carries the spirit of the people who make it a home. And that home continues to be my “home”, my compass, my “where I’m from” even though I haven’t lived there for almost 30 years. My mom referenced an adage she had heard that a house becomes a home when it hosts the trifecta: a birth, a wedding, and a death. Our home hosted one birth, 2 living room weddings and was a home long before my dad passed away in it.

So I send a thank you to Mom for letting me paint on our walls and for loving the guy who made our house legendary.

And, a little music to round out the post: Miranda Lambert's, The House That Built Me 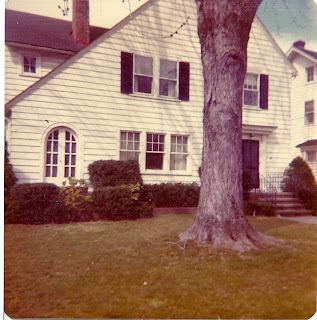 Click the book cover above for more information about my book & purchase options!